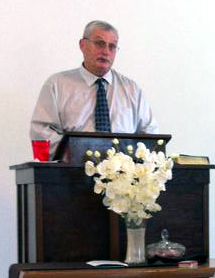 Our pastor is Elder Vaughn Winslett from Leeds, Alabama. Elder Winslett was raised attending Ebenezer with his grandmother and began his ministry here in the early 1990s. In the course of his ministry, Vaughn has pastored churches in Clanton Alabama, Echola Alabama, Grubb Springs Mississippi, and Lawley Alabama.

He and his wife Linda have two sons, Benjamin and Joshua, both of whom are pastors of churches themselves.

Elder Steve Milner is a member of Ebenezer, and serves in a pastoral role two Sunday a month at New Hope Primitive Baptist Church in Montgomery, Alabama.